It’s fair to say I’ve been going through the stages of grief over the past number of months.

At the start of the year, climate change was the farthest thing from my mind.

“It isn’t a major issue”, I thought, because it's not generally talked about and not much was being done about it.

So I started doing some research, and then began to understand the immense pressures we are putting our planet under.

Scientists armed with extensive research and knowledge are making it unequivocally clear that our climate is in a state of emergency. And that our oceans are on the brink of ecological collapse.

Grieving over this is a very strange thing. It’s a very private thing. You haven’t lost anything tangible. And it’s not something you want to openly admit, because some people will think you’ve got a screw loose. They don’t understand, or don’t want to understand, the gravity of the situation. 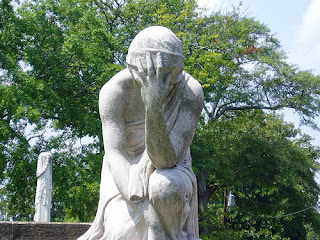 But what I feel is legitimate. I’m not alone in suffering from climate change grief: other people have gone through it - or are going through it - and it’s been written about by academics.

There’s a well-known model of 5 stages of grief. When it comes to the state of our planet, I’ve been through them all. Sometimes I still go back and forth between anger, depression and acceptance, or even feel a number of them at once.

1. Denial
With all my heart and soul I wanted to deny what was happening. Why wouldn’t I want to deny what it means for my kids’ future? And it was so easy to deny – politicians, most of the media and all those deniers out there make it so very easy.

2. Anger
I’ve been angry too. Angry at our politicians, angry at the media, angry at deniers, angry at the mining magnates, angry at the shareholders…angry that it’s currently so damn hard to go about my daily life without putting massive amounts of greenhouse gases into the air.

For other people, their anger is aimed at the prospect of needing to make changes to the way we live and do things. Sometimes that anger is targeted at the people who deliver the message, such as the climate scientists.

3. Bargaining
Bargaining was a good stage for me. I led myself to believe that it wouldn’t be so bad and that what I was reading – albeit from the world’s leading, highly researched and highly conservative experts – was exaggerated.

Adaptation also sounded like a great option, except that it’s not clear we’ll be able to adapt to the extreme conditions we’re currently on track for. Like denial, bargaining was a very easy phase.

4. Depression
Yes, I’ve felt depressed. And feeling such immense concern for my children’s future while the problem is generally being overlooked, downplayed and worsened made it seem all the more overwhelming and hopeless.

5. Acceptance
I’m now at the acceptance stage, but I really don’t like that expression. Yes, I understand what’s happening and understand what it means if we don’t take action. I now feel calm about the consequences if we do nothing.

6. Action
Researcher Daphne Wysham says there's an important sixth stage that we all need to get to as soon as possible. She calls it ‘The Work’, but I like to call it ‘Action’.

We need to get the public, and majority of our political and business leaders, to this stage. It’s a stage of opportunity, of hope, of empowerment and of immense willpower.

It’s a stage where we start genuinely pursuing the many effective, achievable solutions there are out there – solutions which our politicians are ignoring, or even obstructing, because they’re under too much pressure from the fossil fuel industry.

My boys are very young, and unable to do anything about these challenges. By the time they have that ability, the window for effective action will have passed.

That’s why I blog. Because as difficult and unpleasant as these issues are, the only way we’re going to make a difference – and give our kids a chance – is if we all get a reality check and start taking proper, urgent action.

Andy
Hi, I'm a very concern parent. To give our kids a chance we need to take proper, urgent action. The aim of my blog is to help you understand what’s happening to our environment right now, so we can all work together to overcome these problems. Recently, the Chair of the Intergovernmental Panel on Climate Change (IPCC), Rajendra Pachauri, that on climate, “We have five minutes before midnight”. His statement reflects the widely held belief among scientists that time is fast running out and that we must take urgent action to dramatically reduce the world’s emissions.